I stand mildly corrected – “The Hunger Games” was legitimately a pretty good movie.  However, I did think that the first half was better, albeit very shaky camera happy.

What did you think?

I was concerned, as the pictures from the various premiers made the rounds, about the casting.  Visually, it just looked wrong: 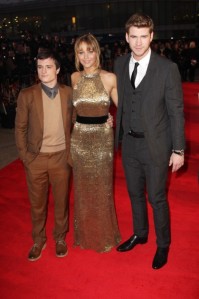 Couldn’t they get Peeta some lifts and a better suit?  Or put Katniss in flats?  Is Gale 8 feet tall?  Having seen the film, I think it works, however.  Gale came off as much more doofy than he did in the book, and Peeta was charming and adorable.  Jennifer Lawrence is a fantastic actress.  I think the love triangle worked.  The effects weren’t too over the top, which I appreciated.  All in all, not bad for a tween fantasy drama.

Meanwhile, Jeff and I went to the Saturday matinee in our new Brooklyn neighborhood, paid $6 for our tickets and the other audience members were 80% 13-year-old girls.  Rock.

I am curious to hear your thoughts as well.  Bonus points if you can integrate an applicable clip from The Greatest Television Program of All Time.

Meanwhile, I took two buses in the rain to attend an 11:00 am viewing on opening day at a theater running “The Hunger Games” every 20 minutes since midnight.  I shared the theater with about 8 other people, some of which also attending solo, and I seriously contemplated waiting in the bathroom until the next showing for a sneaky double feature.

I liked the first half, but the second missed some important life-or-death moments for me.  Specifically, when *spolier* Katniss and Peeta nearly ate the berries, they ever so gingerly sort of moved the berries to their mouths.  They were no where near close to actually eating those things and the announcement went off, telling them to spare themselves.  Peeta’s movie leg wound was kind of gross, but didn’t have the urgency of the book’s mentioned blood poisoning and Katniss’s gash on her head was reduced to a mild scratch.  I read the books, so I know what happens, but still, I wanted to see the characters in legitimately dangerous situations.

But, again, I did like the adaptation.  And as requested, here is my “The Cosby Show” connection to “The Hunger Games” film… two words, Gordon Gartrelle.

It’s tucked into my socks!

The glorious fashion designs of the Capitol could have all been created by Denise Huxtable for Gordon Gartrelle.  This is not a diss – let me be clear that I loved the costumes in the film and I love this nonsense of a shirt.  All it needs is a flower applique or twelve.

Effie is thinking about agreeing with me.

A clear disconnect between “The Cosby Show” and “The Hunger Games” is the polar representations of adults – Cosby: supportive vs. Games: dangerous and inept.   Haymitch is no Heathcliff, but then again Vanessa is no Katniss.  So, Gordon Gartrelle unintentional unitards for everyone!