And should I buy this?

Cape dresses are really having a moment right now, and I have to say, I think they are FABULOUS.  One of my favorite Oscar night dresses this year was Diane Kruger’s graphic black and white ball of cuteness:

Adorable, right?? And Gwyneth Paltrow, who I have never liked, but who has been Working It fashion-wise for the past few years, KILLED it at the Oscars last year in this sleek number.  She looks like a G. 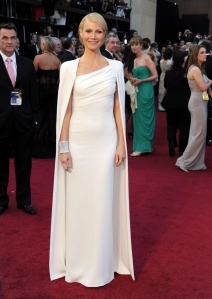 Speaking of being a “G.” When Django Unchained first opened, there was all sorts of a kerfluffle in the media about Quentin Tarantino’s treatment of slavery – was it accurate? too flip? crass entertainment at the expense of a delicate and horrific part of our nation’s history, etc?  I would say no and yes, and maybe, but my favorite commentary was when a Facebook friend-of-a-friend living in Cleveland noted “Sure, spaghetti western and sure, 70’s and yes slavery. And yes, everyone is making pretty sound critiques both pro and con, but as the young kid (17 or so) leaving the theatre said, “damn that movie made me feel like a fucking G!” This has become my new criteria for whether I like a movie or not.  Did I leave the theater feeling like a fucking G?  For this year’s Oscar nominees, I will say Silver Linings Playbook: absolutely not; Zero Dark Thirty: yes!; Argo: a little bit like a G.  At any rate, Gwyneth Paltrow in her cape dress?  A G.

That said, I think a cape dress is really hard to pull off in real life.  They are being marketed and sold, such as this pretty freaking cute (and currently sold out) one from L.A.M.B.:

I mean, that’s pretty bad-ass.  It’s got the sleekness of Gwynnie’s combined with the younger and twee-er length of Diane’s.  Would I get laughed out of the office if I showed up in that to work? Yes.  I think you need to be either a 16-year-old model or a 60+ wealthy Upper East Side widow to pull off a cape.  It also seems like it would really get in the way of certain things, such as sitting down.  That said, still fabulous.  If you have the balls to pull it off, do it!